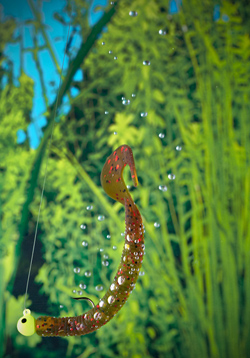 The 5" Poc'it Phenom is my go to bait. The body of the worm holds up fish after fish and the tail has tantalizing action as it works it's way through cover and on the drop. I like to use several different colors (black/blueflake blue, junebug red, red black core)but the color I have been doing the best on lately is the black neon. Recently, I caught a nice 5 lb bass and a 6.5 lb bass plus several nice keepers with this color in a span of several hours. I like to use a 3/16 oz worm weight and Size 2 wide gap worm hook Texas rigged.

I have used the original Mister Twister version of these since I was a little boy fishing with my grandfather back in the early 80's. believe or not I still have three packages of the original poc it phenoms that have never been opened. So glad to see them back!

Glad to see it back, I've used these worms or its predecessor for 20 yrs or so. the origional was called the salty poc'it phenom and man do they catch bass. The only worm I throw.

Write a product testimonial and share your fishing experiences with other customers.

The 5" Poc'it® Phenom® is perfect for these fish