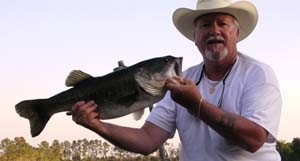 On the last day in March it was a moderate tempature day mid 70's, late afternoon a couple hours before dark, long time friend Hershel asked if I wanted to go fishing at the Ranch, as calls this property he care takes which has a large lake approx. size 1000 acres. The lake has no boat ramp and there is no access because of all the growth on the waters edge incompassing the entire lake except an old fallen down dock that barley floats which is pretty spooky because the lake is home to a huge 14 ft. alligator we call Toothy, plus other gators as well. He was sitting in his usual chair fishing with night crawlers for anything that would bite, mainly largemouth, talapia, sunfish varities and catfish. Me I would rather fish for Ol' Grandma Bucketmouth; I am known as Dr.Fish because I have caught in excess of over 300 bass in the 10lb class and up; 16lb. 12oz. being my largest. I have been fishing more than 54 years. The lake is full of millfoil grass and cattails and one day I am going to put a johnboat in there and I can not imagine what I may catch, but before I venture into that senerio I will have to call a friend to remove the 14 ft. gator named Toothy. I looked through my tackle a grabbed old reliable Mr. Twister Super Lizard in one of favorite colors green pumpkin; huge bass love lizards. I hadn't made but a half a dozen cast and I saw my line jump, I did not feel the fish hit but being an old salt, I had realized I probably had been biten. I tightened the slack in my line and Wham set the hook and the fight was on, she was running all over, after only a minute or so I had her next to the dock where she made the usual surge under the dock nearly braking my 7ft rod and my 14 lb fluorocarbon line, l struggled to get her up from under the dock but managed to do so and I had to lay down on the dock and lipped her. I then walked up to Hershel which was busy fighting a large talapia and did not notice my huge catch; I stuck her in his face shocking him in what seemed to be disbelief; he said I did realize there were bass of that size in here and in the last 10 years of fishing here he had not caught anything over 6 lbs. I had always told Hershel there had to be huge bass in the lake...!!!!! Well the mystery was over.!!!! The bass had laid out if she had not she would had weighed between 13 or 14 lbs...?!?!?
I rerigged my lizard and continued fishing but could not buy another bite for over an hour; so I looked around in my tackle and found another big bass lure; the 9.5 inch Mr. Twister Wide Ribbon Tail Worm in Junebug color; I rigged the worm on my 5/0 wide gap hook with a small 1/8 oz bullet sinker. I fished for another 30 or 40 minutes without a strike; remember now I am restricted to a very small area in which to fish I only had each side of the dock and the end, so swithched sides casting up under over hanging willow trees in about 2 to 5 feet of water with sumergent milfoil grass. I would let the worm sink to the top of the milfoil and slowly drag the worm to a small hole in the grass and let it drop and if there was a bass in the area it would not be able to stand having Mr. Ribbon Tail come rooming in her house; it was the third or forth hole and tap tap I took up the slack and set the hook my rod bent double and I knew I had another big mama on; yes you guessed it after a short fight she went right for under the dock but I was fortunante to drag her out and lip her also....WoW I would have loved to have these two fish in a tourney.....she weighed in at 12 1/4 lbs and she had also laid out....Hershel could not believe another hawg was landed.......he was in awe.....!!!!Both bass were released unharmed and lived to fight another day!
Thank you God for all the wonderful creatures you have given us to enjoy.....Life is a journey Let All Enjoy the Ride
God Bless and Great Health
Tight Lines and Fish Wide Open
Sincerely Lee W. Ashe Jr.
Florida