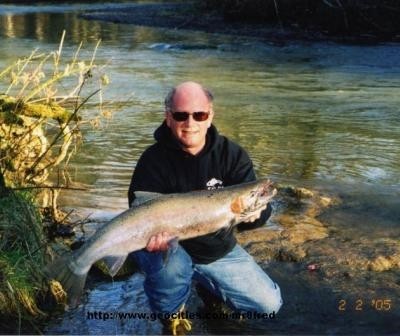 Made this trip with a friend after work near the Salmon Holding Pens on the Skookumchuck River. It was a good trip and good time as there were lots of Silver Salmon and a few Steelhead stacked in this hatchery hole. My partner was marveling at how effective the technique of twitching the jig was. It was almost a fish on every cast, though all the fish (Silver Salmon) were past their prime, and after awhile my partner was ignoring my antics. All of a sudden I hooked a fish that had much more spunk and I guessed it must be a steelhead. Sure enough, it turned out to be a nice big buck hatchery steelhead, and after 10 minutes of battle the fish was subdued. We had planned to cover more holes on the river, but after I landed this fish we stayed at this hole. Between the two of us, we caught at least a half dozen silvers and one steelhead.