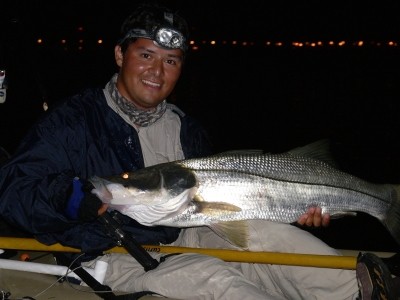 A friend of mine called me up after he saw the tourney snook I had caught on facebook and asked me to take him fishing. He said he had never caught a red or a snook and really wanted to catch one. We loaded up and left. When we passed the baitshop he had a dumb founded look on his face and I explained to him we were going to use artificial baits, he gave me and even crazier look since he thought that the only way you could catch snook was with live bait. I picked up a 24 and 26 inch snook. Mike ( my friend) lost two boatside. I explained to him what to do and on the second cast and he picked up a nice red. He was super happy about it. We wandered the flats and Mike picked up a few trout as well. We had a very good night...