Crappie Caught by Kevin with Mister Twister 2" Teenie™ in Michigan 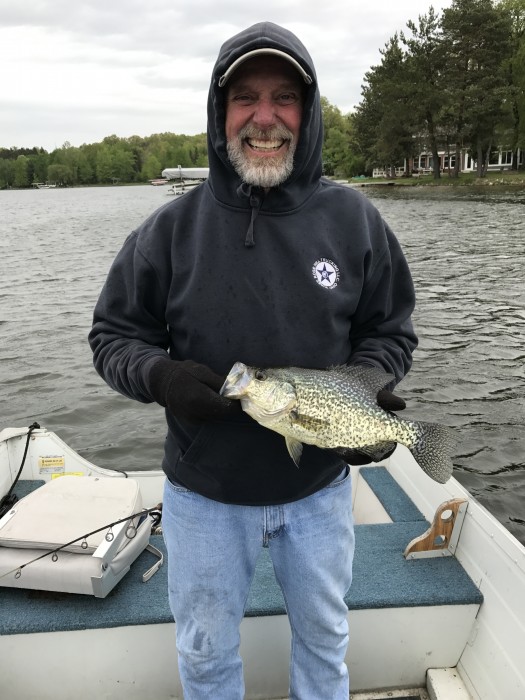 This crappie was caught on a cold Michigan day in the middle of May. We had a cold front push through that dropped temps well below normal. Fishing was tough, cold and slow. My Dad and I were fishing Curly Tail grubs, which seemed to be the only thing that could induce a bite and getting an occasional panfish here and there. We moved off a main lake point and on my Dad's second cast his rod about bent in half. We thought for sure he had a decent Largemouth on. Much to our suprise when he got the boat he landed this monster slab.

This was my Dad's biggest crappie ever. (Photo submitted with his approval) He is an avid Mister Twister curly tail grub fan. He uses them to catch everything. Dad got my brother and I fishing from an early age and for as long as I can remember He rarely did not have a mister twister on his line. At the end of a fishing trip growing up my Dad would declare a "fisherman of the day". This honorary award was given to the person who caught either the most fish, or the biggest fish. (This loving and not all that serious competition continues to this day, and now He has his Grandsons vying for the title of "Fisherman of the Day" everytime we go out)

As my brother and I grew older we started to outfish my Dad and he became the "fisherman of the day" less and less. During one day of on the water joking that we were well out pacing him yet again for "fisherman of the day" he created a new category. The "Species Count". Armed with a classic Mister Twister curly tailed grub (his favorite color is Yellow) we rarely stand a chance in the "species count" category.

The Mister Twister Curly Tail will always remain his go to lure no matter what it is that we are fishing for. No other plastic can seem to replicate the action of a Mister Twister.